Ensuring that when you get sick you are in a nice place is one of the skills of the competent and well-organized traveler. I knew a guy who had hepatitis while on the shores of Lake Toba (a nice place), and waited it out while being fed fruit and tropical smoothies by a lass who was in the habit of wearing so little it couldn’t fail to lift a sick man’s spirits.

I, on the other hand, got hepatitis in the Baluchi desert, where the only food available on a daily basis was an oily dahl, the water came form a deep and smelly well and the local tribesmen had taken up arms against the government. (These tribesmen, partly out of the need for speed, and partly no doubt to improve the gene pool, have been known to shoot the sick.)

I have also had dengue fever in a mud hut with a low-bellied pig rooting around outside for company. The pig, as is the custom of his clan, concentrated generally on his own business.

This time at least I got sick in a nice place.   This gentleman may be standing up in awe and wonder of the place, but I suspect he is just doing a bit of evening fishing.

The only downside is that the nearest doctor is a day away. But provided I don’t actually die (and as I am not convulsing, hallucinating or erupting into suppurating buboes this seems unlikely), I could do much worse.

There is the sound of the sea, and the nightly howls of murder and mating among and between the forest’s denizens.  Further, no matter how bad I feel, unlike my neighbors for the evening nothing here has any real prospect of actually eating me, other than tiny little bits I might not notice.

Picture:  The path into the forest.  One would not think that such an innocent looking place could be the scene for such regular howling mayhem at night:

So, while I have some fever and feel a bit poorly, I could do much worse than choose here to be sick. I sit around eating bush bananas, drinking bush coffee ground in a huge wooden mortar, sweetened with bush honey and bush ants, and watching the sea (and the odd pirogue with an unexpected sail) go by.

So at last here I am on the mend, a bit pale perhaps, maybe even a little introspective, but with my trademark ill-humour thankfully intact. 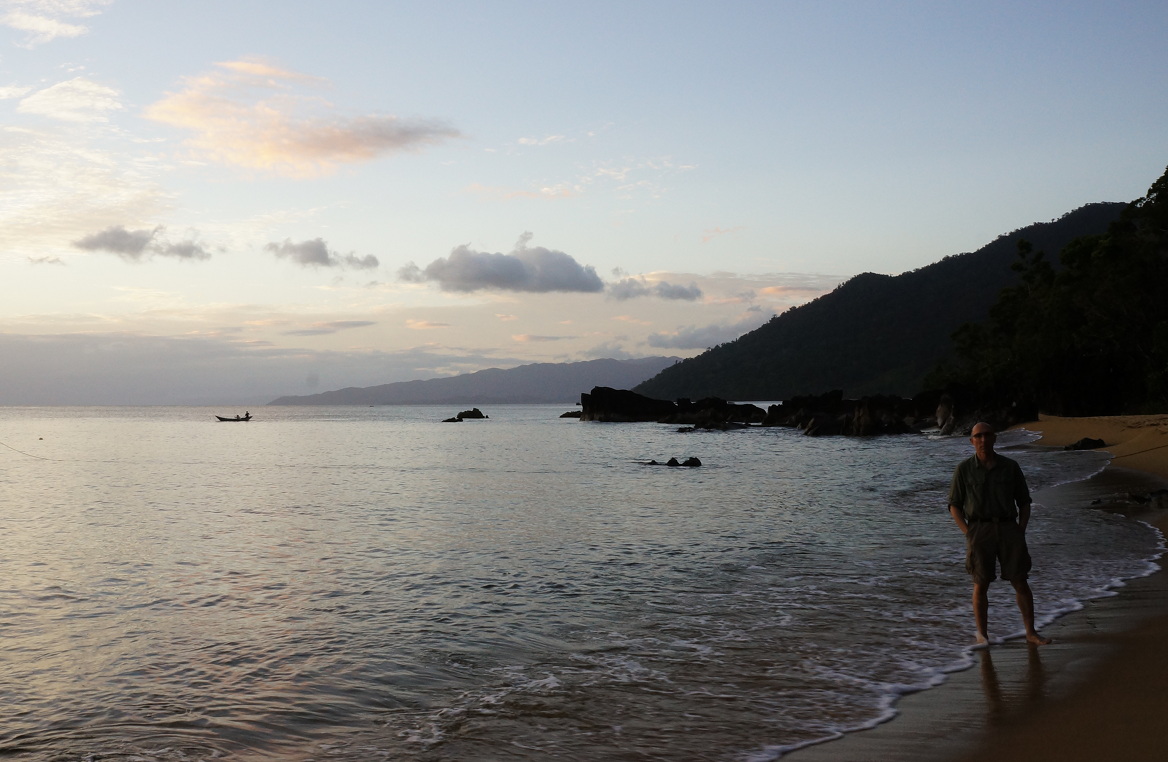 This last photo I just had to throw in. I don’t know if the colors will come through on your screen, but in the original, the silvery 5pm light creates magic.