Walked today up to Haghartsin Monastery, near the top of a tree covered mountain.  A beautiful walk, the Autumn road lined with carpets of red, and the trees still dressed in yellow that had not yet fallen.  In some places so dense it seemed like a mist:

There was the sound of a stream and ice in the air.   There were snow-covered mountains nearby, but I wasn’t going that high:

Around lunchtime I reached Haghartsin, a monastery built about 800 years ago and whose name means Dancing Eagles.  A nice place, being ill-restored, and somewhat overrun by very pleasant cows: 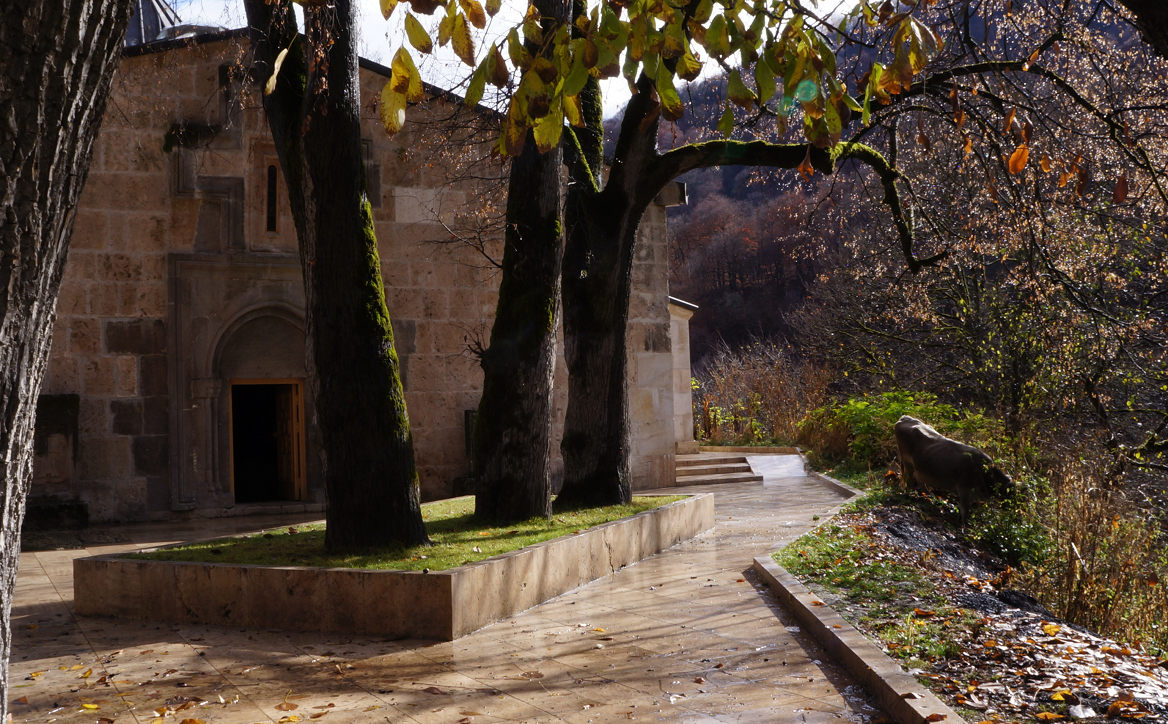 Even so it had a certain timelessness:

and people still came to its ancient chapels to make offerings:

The walk back was 12km mostly downhill, and  by the time I reached the bottom of the mountain I had two blue toes.

I rejoined a main road populated by dogs with anger-management issues.  At one stage I was surprised by a pack of 5 or 6 nasty looking canines charging at me out of a gate.  I swung my big stick and roared at them.  To my amazement it worked.  Perhaps they sensed I had spent long periods in countries where bad dogs get eaten, or perhaps people in Armenia just don’t roar at dogs.  In any event they backed off in total disarray.

I would have liked to have taken off my boots as I was really limping now, but the cold and the dogs meant no:  every few hundred meters I would get menaced by a couple of large hairy specimens, and would have to swing the big stick at them and growl “come on you miserable punks, make my day”.  I was unsure if this would have been as convincing bootless.

In the end, none of them decided they wanted to make my day and I limped home late.  I hadn’t had lunch so stopped for a snack of bread and whey.  But for the evening I decided that some meat-eating would be in order.

7 Responses to “Bad Dogs Get Eaten”

Leave a Reply to J. A. Robinson Cancel reply